In 1985 the club was incorporated and the annual show has been the second weekend in August ever since.   From 1984 to 1992 the show was held on Rockport 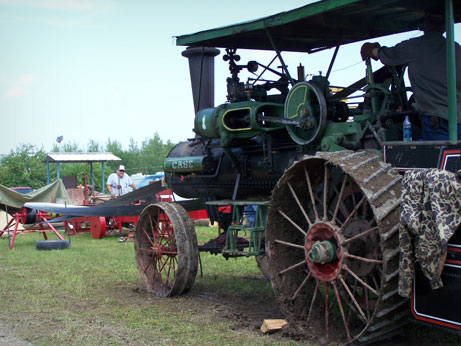 Road on the Duby’s property.  In 1992 the club purchased land on French Road in Alpena Township and began building the current showgrounds.

In 1993 the barn was complete and the working windmill was in place to provide water for the steam engines and the 10th annual show was held at the new showgrounds.  In 2005 the club broke ground for the clubhouse.   Both buildings are a testament to the many skills of our members, who built both buildings with many donated materials and heavy machinery.   The clubhouse includes a kitchen, bathrooms, large meeting/seating area and a fabulous front porch overlooking the grounds.

The club takes pride in the permanent working displays that is has collected and built through its history.  The club uses the proceeds from the annual show, membership dues, showground rentals, and donations to continue improving the displays and showgrounds. The Club attends local events such as the Hillman and Hawks centennials and Posen Potato Festival with working displays to help these communities celebrate their farming heritage.  We have also hosted Boy Scout troops and disabled adults for special events.


As a way to give back to the community that has supported our club, we now host Apple Pumpkin Fun Day in the fall.  This is a free day for children to come out and enjoy games, paint pumpkins, horse drawn wagon rides and apple cider making.  We also invite local artisans and crafters to demonstrate for the children such skills as basket making, wool spinning and woodcarving.